Found nowhere else on the planet, the charismatic lemur is undoubtedly Madagascar’s greatest tourist attraction. Yet for many who live in the African island’s urban areas, sightings are rare.

Conservationist Julie Razafimanahaka, who grew up in capital city Antananarivo, recalls her first wild encounter took place as a teen during a camping trip with a Scout group to Andasibe National Park.

“We spent two hours looking for the Indri, the largest lemur we have,” she explains. “When we found them, they started singing. The sound was amazing. I loved it. You could hear it from kilometres away.”

Up until today, the memory remains vivid. But even more striking was the shocking reality these animals were on the brink of extinction due to human activity.

“That really stuck in my mind,” says the softly spoken but fearlessly determined 40-year-old wife and mother, who introduced her daughter to Indri at just six months of age. “I knew I needed to do something.”

It was a spur to kickstart a career in nature preservation – although initially Julie’s studies revolved around a far less enigmatic animal: bats. It’s a choice she still struggles, with a smile, to explain.

“Honestly, I ended up doing that because I always dreamed of going to the national park of Tsingy De Bemaraha on the western coast. It’s a classic landscape that always features in documentaries about Madagascar.”

Since she started in 2003, the number of known bat species has increased from 52 to over 100. But her involvement in the organisation, which later became known as Madagasikara Voakajy, would have a more significant impact in the longer term.

When the NGO’s director left, Julie took the difficult decision to give up her PhD and take on the role. It’s a choice she vehemently insists she’s never regretted.

As a Malagasy woman without the same level of qualifications as her British, male incumbent, it was a daunting prospect. But aware the organisation might otherwise collapse she rose to the challenge.

To date, her achievements have been impressive: a study on bushmeat hunting is being used to lobby a change is law; seven protected wildlife areas have been established across the country; an education programme is shaping a future generation of conservationists; and a pioneering project hopes to guarantee protections of the Grandidier’s baobab tree by establishing a fair-trade market for the fruit.

All of this has been largely possible due to Julie’s admirable relationship with communities. So, what’s the secret formula to her success? The trick, she says, is simple: stop and listen.

“There has always been a perception that local communities are the cause of degradation and that educated people who’ve been to university have the right ideas on how to protect nature,” she explains. 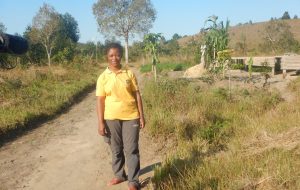