Militants, terrorists, illegal loggers: the dangers lurking inside Nigeria’s forests are endless. But the threats have never been enough to deter Rachel Ikemeh from her line of work.

Growing up in the southern Delta region of Nigeria, Rachel admits she was clueless about conservation. “I was the average Nigerian – disconnected from anything to do with wildlife,” she laughs.

With no formal background in science or biology, a career working in nature was accidental. After graduating from university with a degree in Public Administration, she desperately applied for jobs and ended up with an internship at the Wildlife Conservation Society. It opened her eyes to the beauty and fragility of her country and ignited a concern that had always been flickering deep down.

“As a child, I would watch trucks carrying logs. I was curious about where they were going,” she says. “Suddenly I was understanding what was happening. Everything was falling into place.”

Young and optimistic, she was determined to find a solution – even if the path ahead was never easy. Although she hates to admit it, being a woman in a male dominated profession did pose obstacles. Her family were also concerned about the dangers involved in her work, resulting in her mum even offering to match her salary if she agreed to come home.

But aware bigger issues were at stake, she refused to be distracted from her cause.

“I had to train myself not to allow all of this negativity and condescending statements to get into me,” she says, exemplifying the passion and tenacity that have largely driven her success.

Describing herself as a person “who wants to get everything done yesterday”, she’s become an unstoppable force in the world of West African conservation.

Responsible for the country’s first scientific lion study, she’s also been instrumental in creating two conservation areas in the Niger Delta and the southwest, providing vital protection for species such as the highly endangered Niger Delta red colobus monkey and the Nigerian-Cameroon chimpanzee.

Above all, she’s striving to change people’s attitudes towards the forest by using every communication tool available, aimed at every age group. “We can’t leave any stone unturned,” she says.

At times it’s been an uphill struggle. She recalls a protest staged by young boys demanding she leave their forest and speaks with sadness about her own personal sacrifices, admitting her young daughter “didn’t really know me as a mum” in the early days.

Her end goal, though, has always kept her going.

“In the last 10 years, there’s been more destruction in Nigeria than in previous years combined,” she laments.

“So we can’t stop, we can’t take a break because we’re this place where we either do what we are doing or lose the forest and the wildlife forever.” 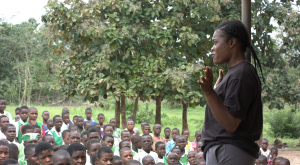