Watching elephants mud wallowing in nature documentaries presented a very different image to the brutal reality Suleiman Saidu faced in the field. Programmes on NatGeo Wild inspired the young Nigerian to become a ranger, but it wasn’t until 1999 – at the age of 29 – that he first saw an elephant in the wild.

At that time, the poaching crisis was spiralling out of control.

“During one patrol, we came across a dead elephant with its tusks removed by a machete,” he recalls. “It had bled to death. I felt so bad. It was a terrible experience. It really pained me.”

Home to the largest population of elephants in West Africa, Yankari Game Reserve in north-east Nigeria is the country’s premiere wildlife destination. Twenty-two years ago, when Suleiman first started working here, communities were still living inside the park. The relationship with rangers was strained.

“They were very hostile towards us,” explains the unshakeable hard worker. “They accused us of not doing our jobs and allowing elephants to destroy their farms. They saw us as a threat to their livelihoods.”

The rangers he was working alongside were equally disillusioned: a lack of training and equipment combined with low salaries created a breeding ground for apathy. Worse still, incidents of bribery and corruption were alarmingly high.

Changing the narrative was top of Suleiman’s agenda. He was determined the story of Yankari would take a different course.

Two stand out projects, part of a co-management agreement between NGO the Wildlife Conservation Society and the government, have helped to transform the fortunes of the park: one initiative enables local school children to enjoy and appreciate wildlife on game drives, while an elephant guardian programme has equipped farmers with the tools and knowledge to safely chase troublesome animals away.

“The communities are much more pro conservation; they feel part of the system,” he says. “Now they give us lots of support and even share information about poachers.”

But success hasn’t come easily. Whether chased by elephants or confronted by armed poachers, Suleiman admits he has feared for his life on several occasions. Over time, he has learned the trick to survival is remaining calm.

Discipline and a strong sense of morality have also helped him to resist financial bribes.

He describes an incident early on in his career when he refused to give in to a band of illegal loggers claiming to have government connections.

“I wasn’t frightened because I knew I was doing the right thing,” he says. “So there was nothing for me to fear.”

Besides, money has never been his motivation. The father of five always knew life as a ranger would never bring him “serious money”. But sacrificing financial gain and even more precious time with his family is justified by the important end goal of securing a future for wildlife.

“My main aim is that these protected areas will thrive for the generations who come after us, so they can benefit as much or even more than we have benefited.” 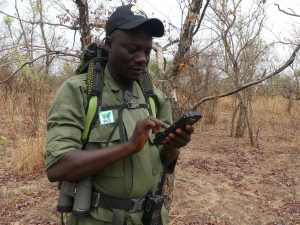