We use cookies to give you the best possible online experience. If you continue, we'll assume you are happy for your web browser to receive all cookies from our website.

A global pride of 47 life-sized lion sculptures has appeared on the streets of major cities around the world to raise awareness of the threats facing lions and raise vital funds to support conservation projects across Africa.

Following the huge success of the 2018 Tusk Rhino Trail, Tusk has once again teamed up with Curator Chris Westbrook who has brought together a spectacular array of talented artists from the world of Art, Design, Film, Theatre and Comedy, to release a phenomenal Pride Of Lion sculptures through the streets of London, The Hamptons – New York, Edinburgh, Nairobi, Bristol, Wellington and Sydney.

Each sculpture highlights the magnificence of lions, threats to their existence and the people and solutions working for their survival – raising awareness for conservation efforts across the world. Internationally recognised faces including Rolling Stones guitarist, Ronnie Wood, wildlife photographer, David Yarrow, artists Ian Davenport, Gavin Turk and David Mach, rugby legend Richie McCaw, American fashion designer Donna Karan, and actors Deborra-Lee Furness and Noel Fielding have all collaborated to craft their own unique pieces of art. Each lion sculpture has been generously supported by a Tusk partner or supporter and will be on display for 8 weeks until 24 September 2021.

Following the interactive sculpture exhibition, the unique works of art that have been displayed across the UK will be auctioned in London by leading global auction house Bonhams, on November 9th, while the US Pride will be auctioned in conjunction with the African Community & Conservation Foundation (ACCF) at The Wölffer Estate in The Hamptons, on August 27th. Funds raised will support the work of Tusk and its partners in protecting species and empowering communities across Africa. To express interest in either of these events, contact info@tusk.org 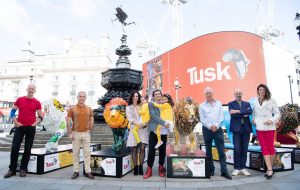 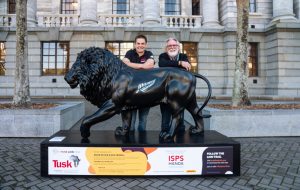