Dorothy Florence Lowakutuk is one of Reteti Elephant Sanctuary’s first female elephant keepers. As the first community-owned elephant sanctuary in East Africa, Reteti rescues abandoned and orphaned elephants, rehabilitates them back to health and then releases them back to the wild.

“In cases of abandoned elephant calves“, says Dorothy, “we look to reunite them with their mothers within 48 hours. If that fails, that is when we find a home for the calves at the Sanctuary.

“It’s a conflict of emotions for us when we start the rewilding process for the young elephants. However, from the moment these orphans arrive in our care we’ve been preparing them for such a moment.

“We are usually pleased and excited for them, but it’s tinged with sadness and apprehension too. Being in our care for four years has taught us to love with grace, accept our little elephants when they come, and allow them to leave when it’s time.

“Releasing the first group of elephants was really emotional for us. We had started with them, and now we are seeing them leave.  Shaba, one of the elephants, was one of my very good friends and I had grown fond of her. It was powerful watching her take up the mantle of responsibility of being a leader and a Matriarch.

“She was difficult to raise because she came to the sanctuary when she was almost two years old, compared to two months like the rest of the calves. She was rowdy and took time to make friends with the keepers – at that time we had little experience with baby elephants.

“She had protected and instilled good qualities with the other little calves. It was emotional watching her leave and I sorely miss her.

“The responsibility of showing elephant babies that they have come to the right place, the right family, is what motivates me. Nadosoit, when she came, was so ill that she couldn’t get up, and we had to put her on drips. It is really difficult to see a baby elephant that close to death, but we worked hard to keep her alive. We don’t get tired of these elephants. Nadosoit was lying down for a week, but the moment we saw her stand, we had more energy to work. She has now been released back to the wild.

“The Sanctuary plays a critical role in not only saving species, but also in breaking down stereotypes, and redefining wildlife management by providing employment opportunities to women and pastoralists whose intimate knowledge of nature is deemed as an asset, despite their little-to-no formal schooling. This, for generations, had meant they could only dream of a confined life with no other options other than pastoralism.

“I want the world to know that we, the women of Reteti have shown my community, my country, and the entire world that this job is for anyone, not just for the formally educated, and not just for men. No one in my community believed a woman could do this, and I am proud of myself.”

Reteti is a conservancy of the Northern Rangelands Trust, who are participants in the Wildlife Ranger Challenge. Find out how you can do your part #ForWildlifeRangers here

Reteti is the first community-run elephant sanctuary in East Africa. It was established in August 2016 in Namunyak Community Conservancy – now Ngilai, Kalepo and Nalowuon conservancies, which are home to some of the largest elephant populations in the region. The sanctuary currently provides employment for 58 people, most of whom are drawn from the Ngilai community of Namunyak. 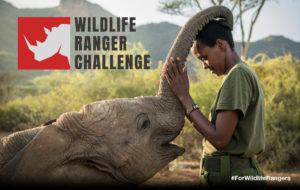