In the wake of the COVID19 pandemic and its devastating global effects, we have come to the difficult, yet necessary, decision to cancel the 2020 Lewa Safari Marathon, which had been due to take place on the 27th June in Kenya. Click here for the full announcement.

In its place, we have decided to stage the “Virtual Lewa Safari Marathon“, with the option to run 5km, 10km, 21km or even 42km around your garden, street, local park, beach, or perhaps on a treadmill. This isn’t a race; there isn’t an entry fee; there’s no stop watch, but we believe it will be a fun and easy way for you (and your family, colleagues and friends) to help counter the devastating impact this pandemic is having on our project partners.

Tusk’s Lewa Safari Marathon invites participants from all over the globe to compete in an internationally acclaimed event, running through one of Africa’s most spectacular wildlife conservancies. Regarded by Runner’s World as one of the world’s top ten “must do” marathons, runners of all abilities take part. The event has become one of Kenya’s major sporting events. Individuals and corporate teams enjoy an unforgettable experience running alongside some of Africa’s most amazing wildlife and witnessing firsthand the difference made by the funds raised.

The Lewa Safari Marathon was first held at Lewa Wildlife Conservancy in 2000 with 180 participants. In 2019 the event attracted 1,400 runners and raised more than £400,000 for projects across Kenya.

International participants usually arrive on the Thursday beforehand to make the most of the amazing location and to acclimatise. Travel and accommodation can be arranged with Exceptional Travel at a range of luxurious safari lodges and tented camps in and around Lewa.  Our travel partner can also arrange visits to other magnificent Kenyan wildlife destinations.

— Spectator entry fees also apply & there is a children’s race —

The event is run within the Lewa Wildlife Conservancy and through some of East Africa’s most beautiful scenery. Mount Kenya lies to the south and there are breathtaking views north towards Samburu and Mount Ololokwe. The heavily protected 61,000 acre conservancy is home to over 100 rhino, herds of elephant, big cats, and a vast assortment of plains wildlife including giraffe, buffalo, the rare Grevy’s zebra and much more.

The course is set on dirt roads over an undulating 13-mile course through the reserve, across savannah plains, along river banks and through acacia woodland before finishing close to Lewa’s headquarters. The full marathon is two laps of the same course.

The race begins in the early morning before the heat of the sun gets too much. The altitude (Lewa is at 5,550ft above sea level) adds to the challenge. The course records are 2:18:42 for the full marathon, and 1:05:00 for the half. 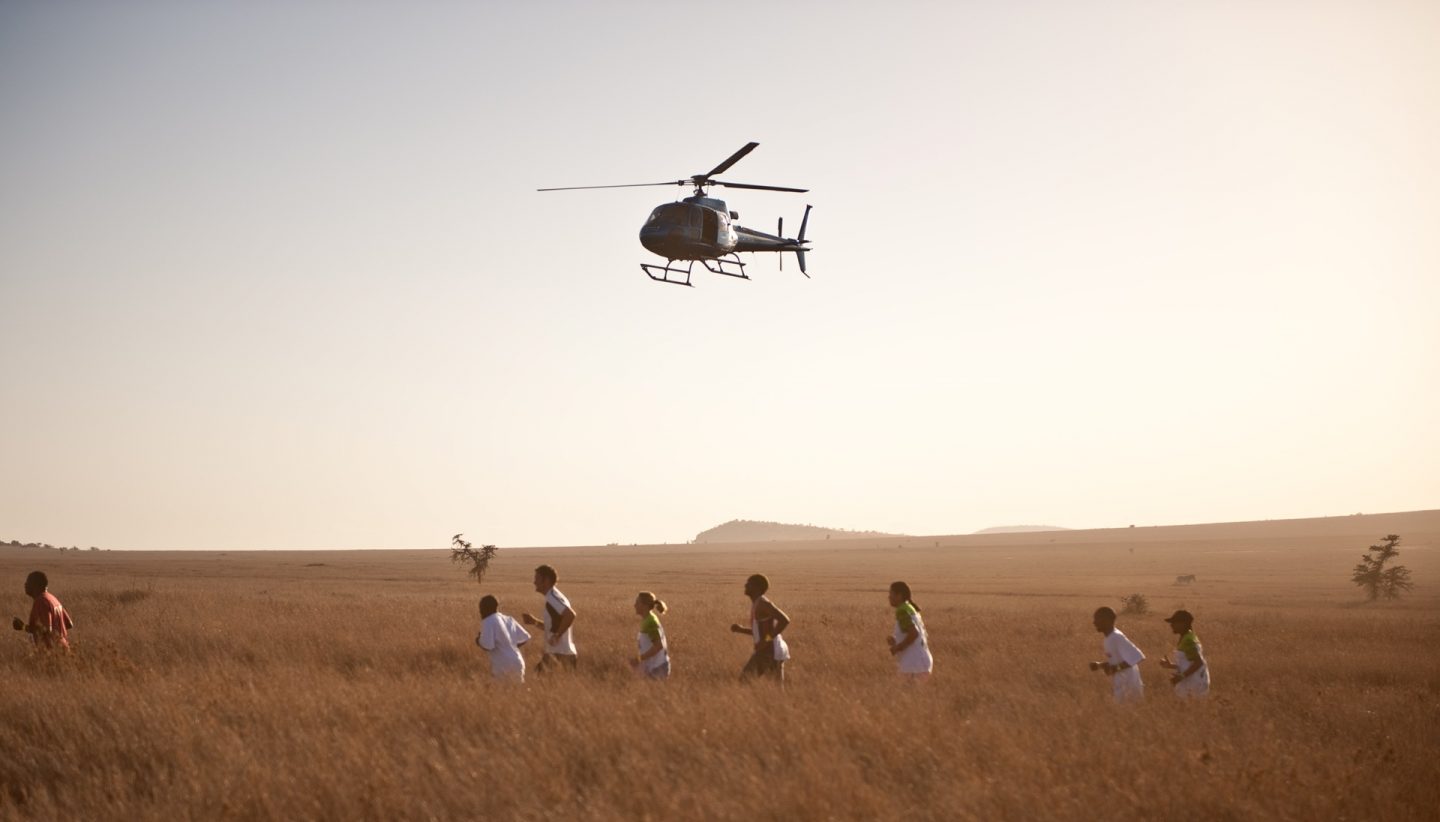 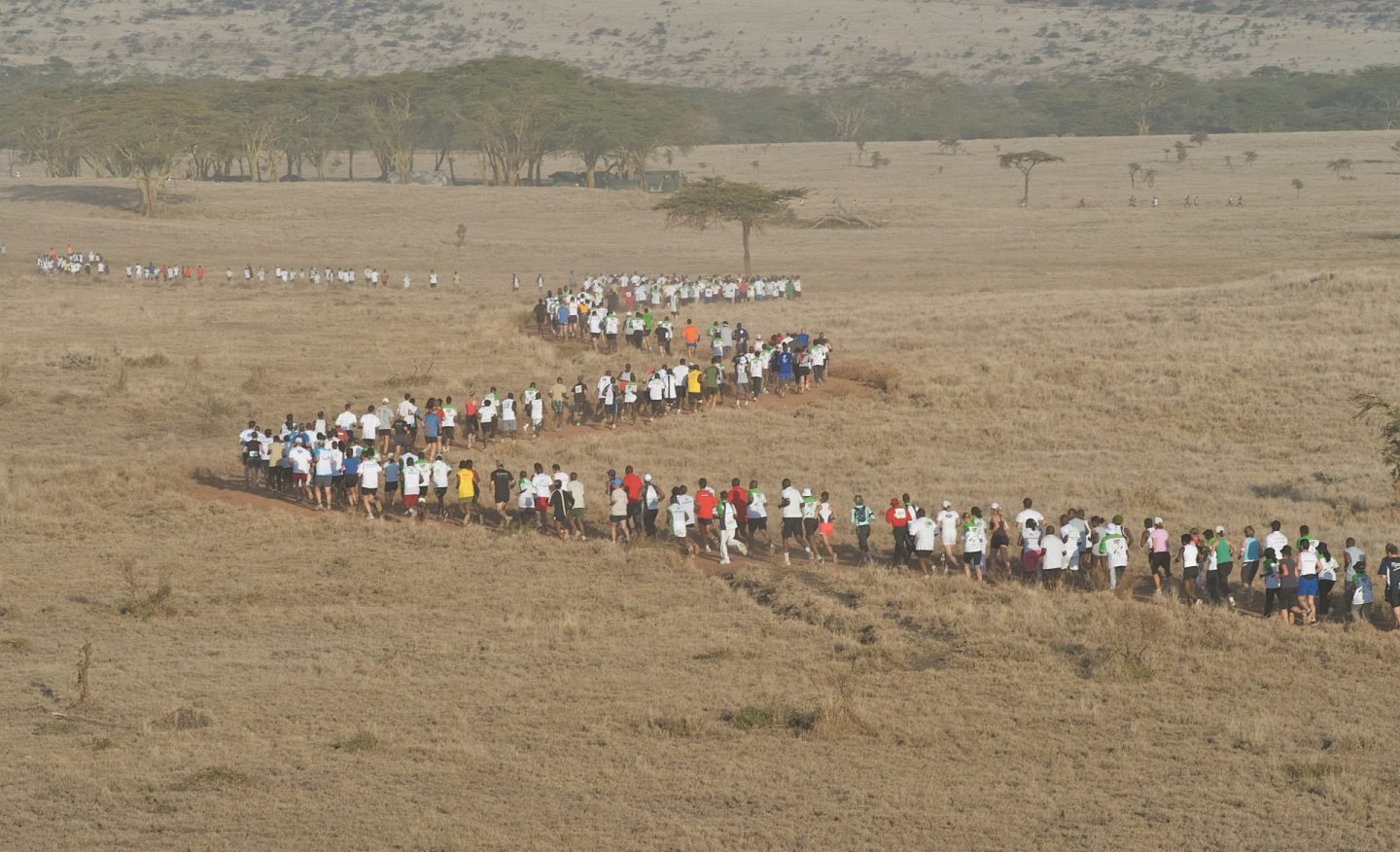 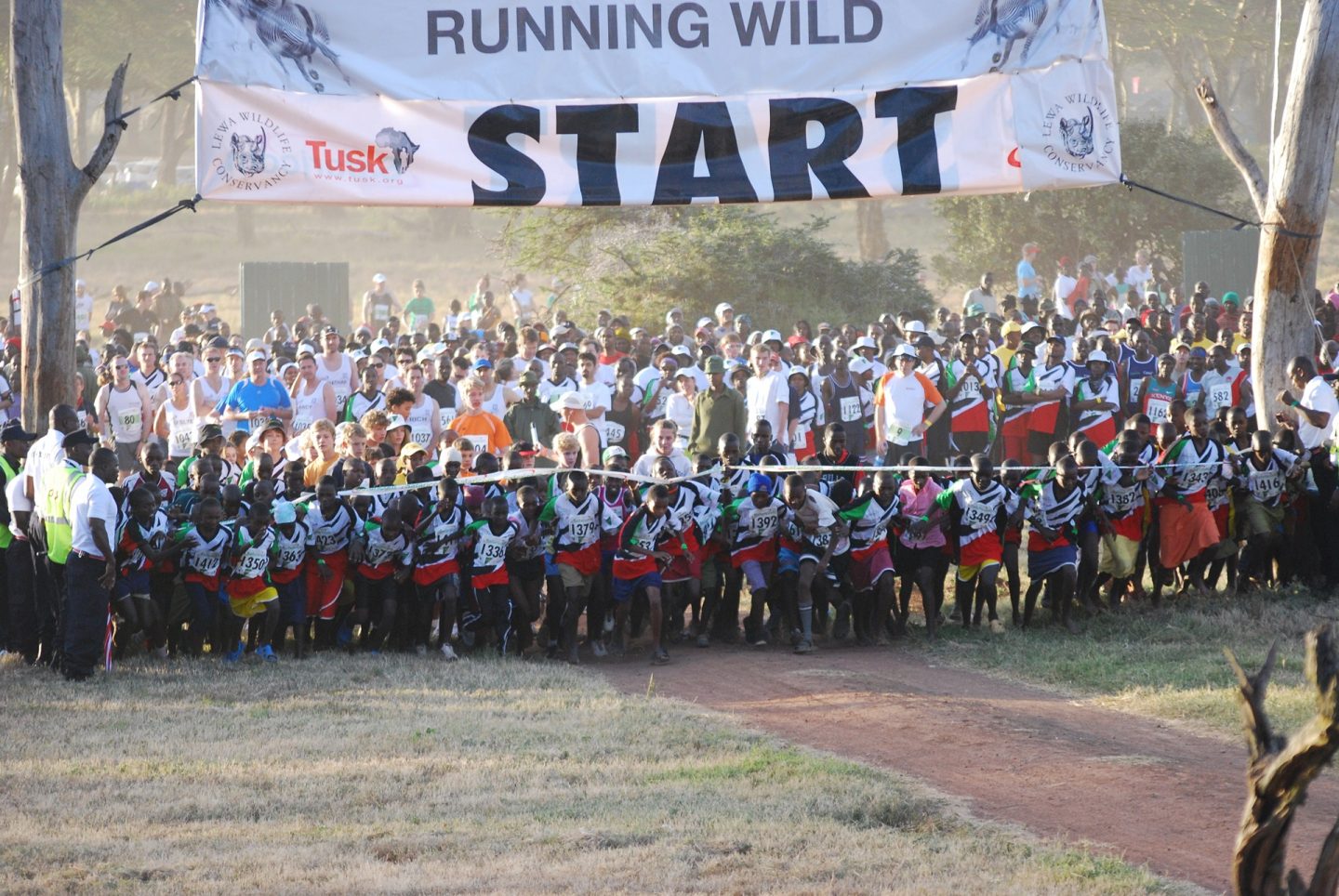 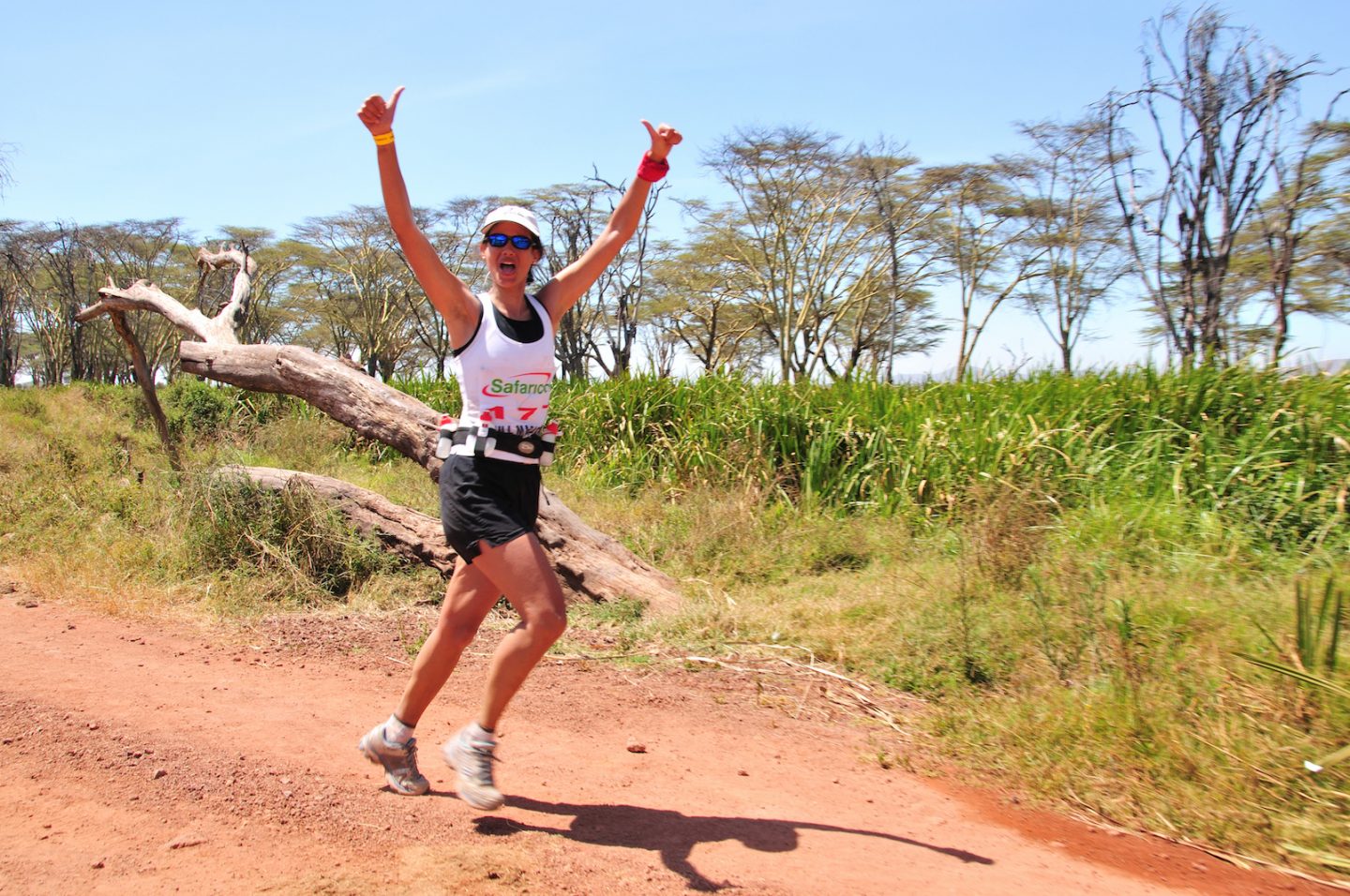 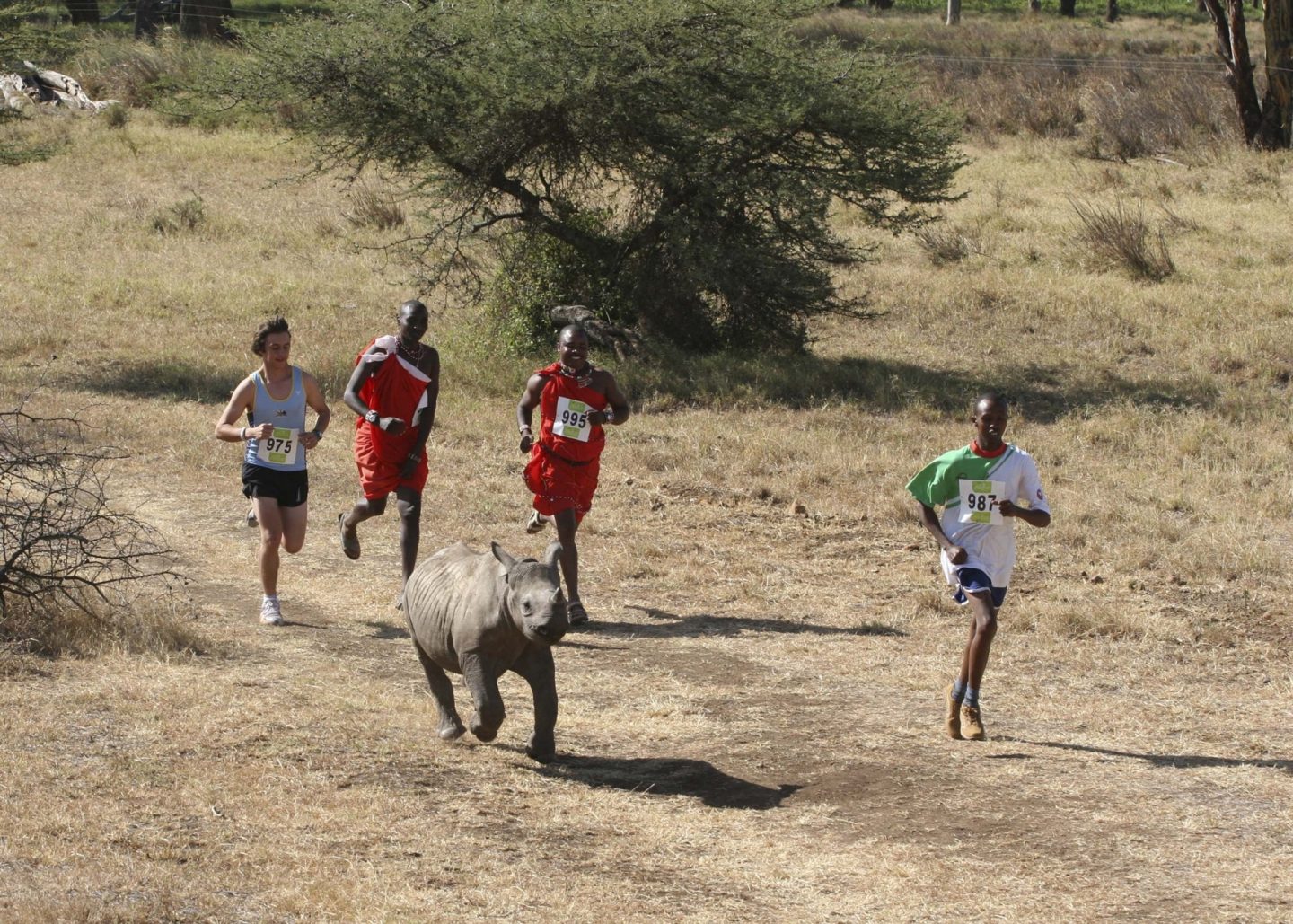 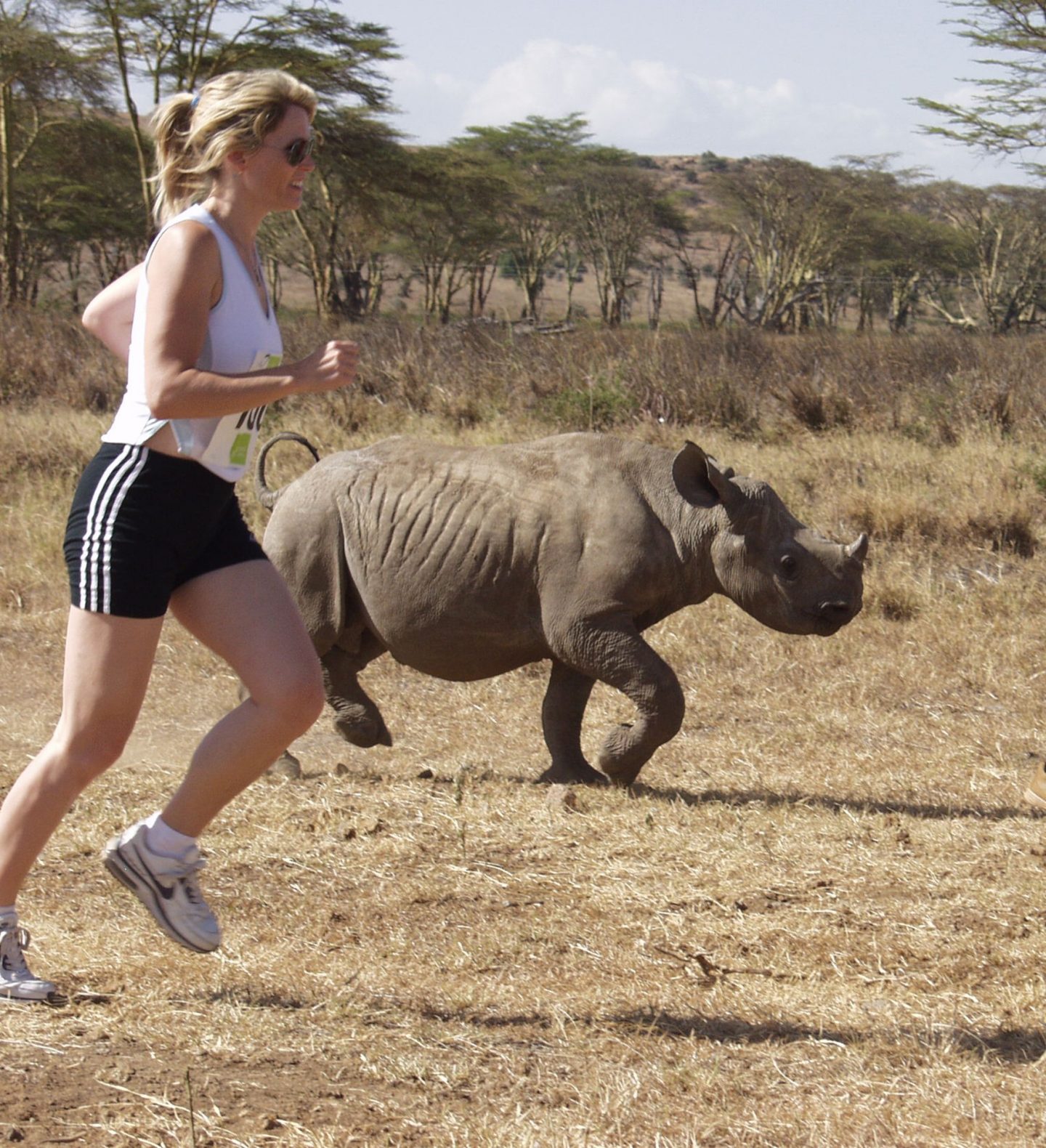 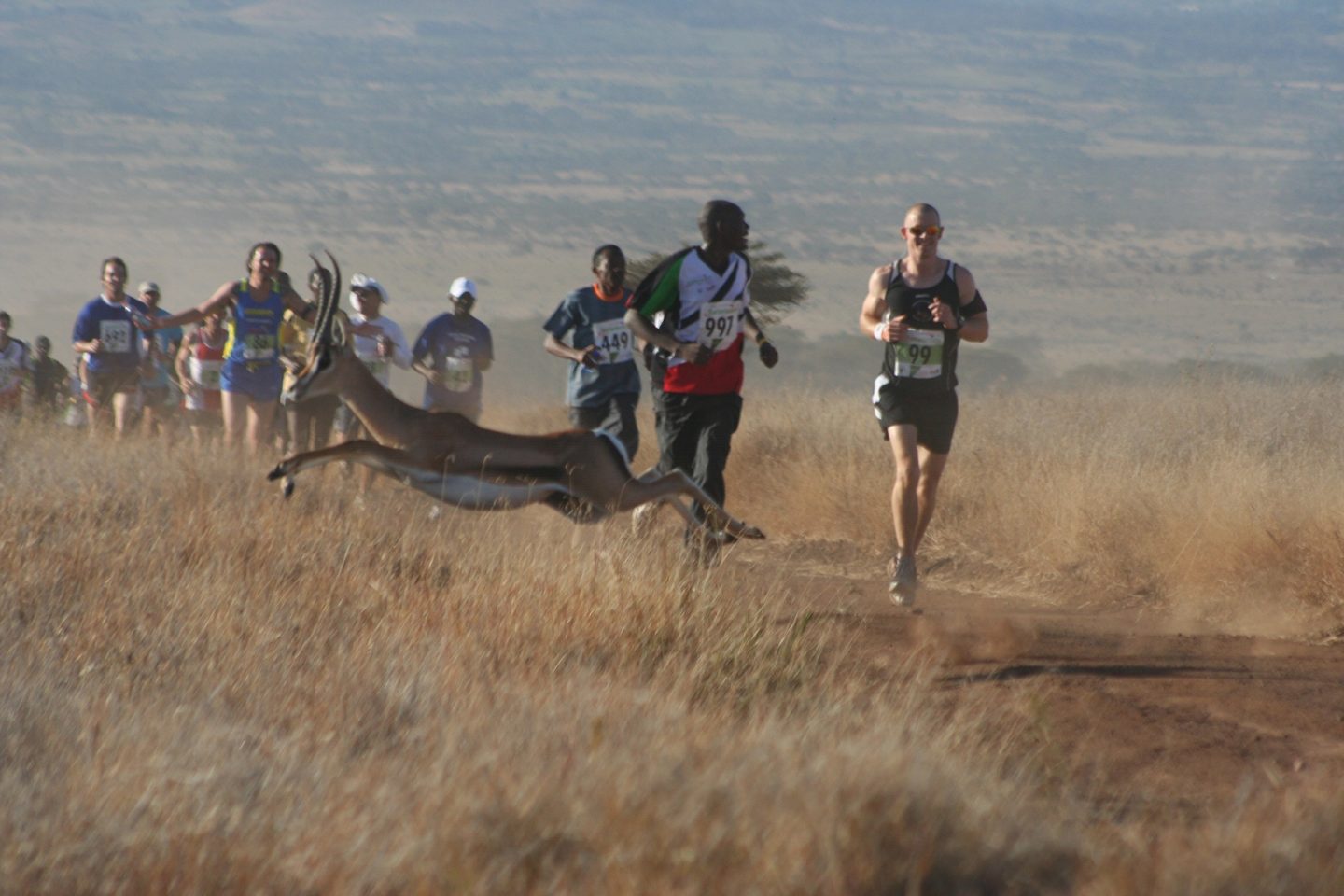 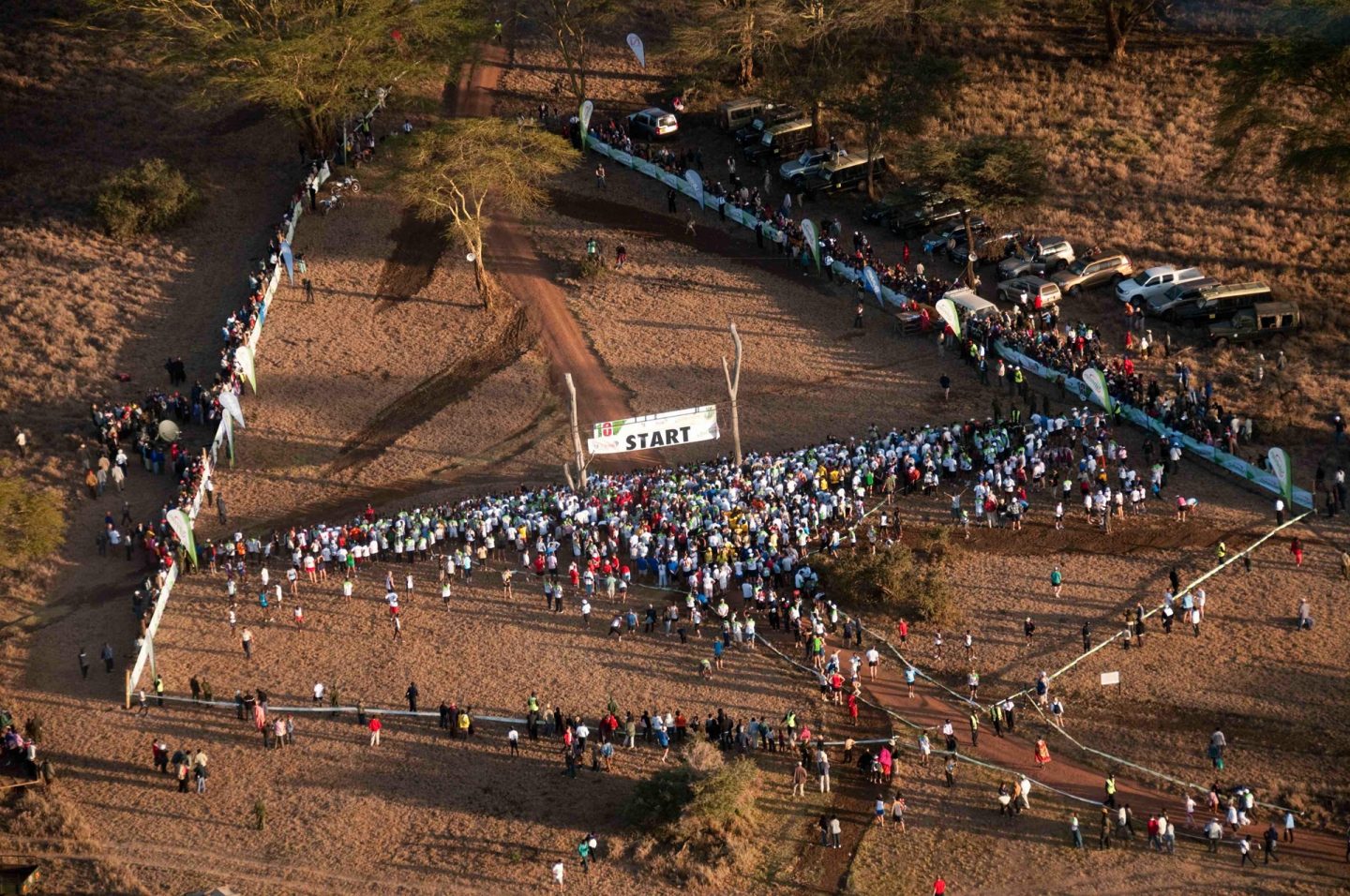 SEE AND MAKE A DIFFERENCE

Each participant is asked to raise a minimum of £1,750 in sponsorship, and many go on to raise considerably more. All the funds raised are invested directly into Tusk’s projects in Kenya – including the Lewa Wildlife Conservancy.

The Lewa Safari Marathon has so far generated more than £6m

The Lewa Wildlife Conservancy is renowned worldwide for its innovative and highly successful community-led conservation work, and it has been one of Tusk’s major partners right from the start. Their pioneering work has helped recover Kenya’s black rhino population from the brink of extinction, and protects a quarter of the world’s critically endangered Grevy’s zebra. Lewa’s community development programme provides water for drinking and irrigation, and supports agriculture, healthcare and road infrastructure. The Lewa Education Programme currently supports 16 primary schools, 3 secondary schools, and over 13,000 children.

The Lewa Safari Marathon participants not only see Lewa’s incredible wildlife that their fundraising efforts help protect, but also share a memorable experience visiting water projects and schools, gaining a full understanding of the difference they are making. You can find out more at www.tusk.org/tusk-projects

N.B. The Lewa Safari Marathon is unique and should not be viewed like the many City marathons held around the world. This event has been established and organised every year by Tusk as the charity’s own flagship fundraising initiative to support specific conservation, education and community projects funded by Tusk in Kenya. Tusk therefore asks all prospective runners to note that by entering this event, they are required to raise funds for the Lewa Safari Marathon’s existing projects. Unfortunately, Tusk is not in a position to accept entries from runners who wish to use this event to fundraise for other charities.

It was tough - tougher than anything I’d been faced with before and required every inch of my energy, stamina and stubbornness... What got me through was the knowledge of what we were raising money for, the children who sang for us in their classroom built by Tusk and the communities that will benefit from a new reservoir. This is what the Safari Marathon is about.

MORE THAN JUST A RACE

With a prize awarded to the team that raises the most for Tusk’s projects, the event has also become an incredibly popular (and competitive) team-building event for corporate teams. Artemis Investment Management LLP, BlackRock, Goldman Sachs, Emso, Investec Asset Management and UBS all regularly enter teams, and Tusk would would love to see more joining the competition! 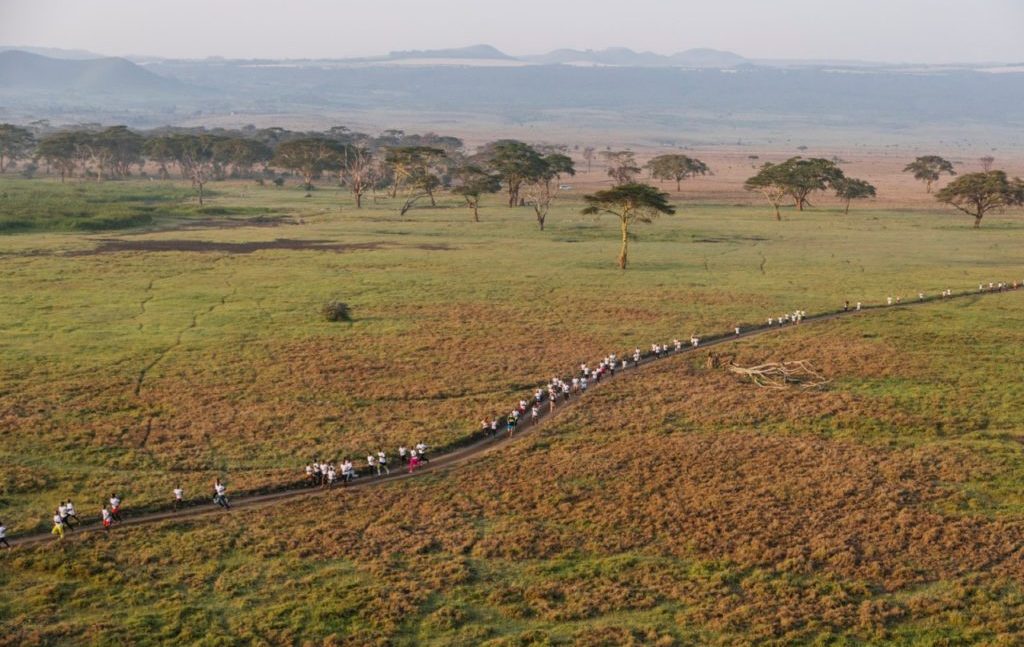 Marking its 20th Anniversary, this year’s Safaricom Marathon, hosted by Tusk and the Lewa Wildlife Conservancy, once again saw more than 1,400 runners from over 40 countries tackling the incredibly challenging yet breathtakingly beautiful course in northern Kenya. 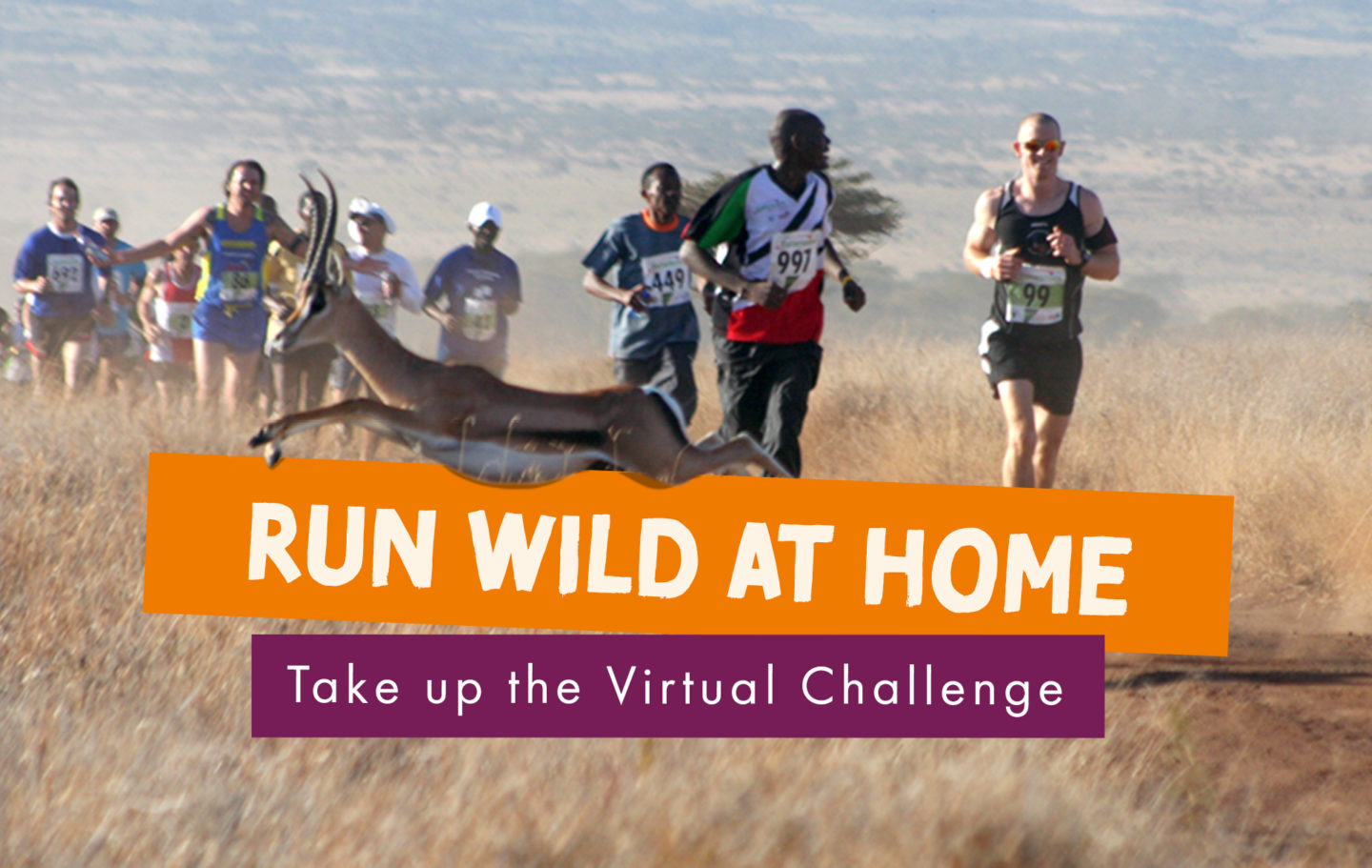 In the wake of the COVID-19 pandemic and its devastating global effects, Tusk and the Lewa Wildlife Conservancy are staging the "Virtual Lewa Safari Marathon" to replace this year’s Lewa Safari Marathon, which had been due to take place on the 27th June in Kenya.