Tusk is proud to announce the unveiling of the final installation for the global Tusk Lion Trail in Sydney, Australia.

Following the huge success and popularity of the Tusk Rhino Trail in 2018, the British charity whose Royal Patron is HRH The Duke of Cambridge, launched 47 life-sized lion sculptures onto the streets in iconic locations worldwide including the UK, the US, Dubai, Nairobi, New Zealand and lastly, Sydney, Australia.

Charlie Mayhew MBE, Tusk CEO, said: “This year we rolled out lions across the world. We have put together a trail of 47 lions, designed by an extraordinary collection of not just artists, but sportsmen and celebrities who have taken part in the trail.”

As one of the world’s leading advocates for biodiversity, and one of only 17 ‘megadiverse’ nations in the world, Australia is home to more species than any other developed country, with most of the nation’s wildlife found nowhere else in the world. While it is not home to many lions, Australia is honoured and proud to be the final host of the Tusk Lion Trail, an activity dedicated to raising awareness of the threats to lions globally, today, as part of the country’s commitment to protecting biodiversity.

Tony Abbott said: “I’m pleased to be at the Sydney Tusk Lion Trail unveiling in my role as a patron of ISPS Handa. It would be an epic tragedy if these magnificent creatures were to vanish from the earth. Hence the importance of Tusk’s conservation work under the patronage of HRH Prince William.”

The Sydney ‘Civilian Warrior’ lion by David Griggs formed the final piece of a high profile, international art installation in support of African people and conservation, and followed in the footsteps of the hugely successful 2018 Tusk Rhino Trail. Tusk launched 47 life-size lions in total, including the reveal in Sydney, in partnership with global sponsor DHL and global co-sponsor ISPS Handa.

To create the global trail, Tusk teamed up with Curator Chris Westbrook who brought together a spectacular array of talented artists from the world of art, design, film, theatre and comedy, including David Griggs, whose design was sponsored by ISPS Handa.

Artist David Griggs of Adelaide Gallery GAGPROJECTS (Greenway Art Gallery) said: “Creating this work was a beautiful experience, particularly with the knowledge that my lion has the potential to educate and at the same time help an amazing charity. The Tusk Lion Trail fuelled a creativity that embodies way more than an artist’s expression.”

The population of African lions is estimated to have declined by as much as 50% over the last 25 years, whose numbers are now fewer than the world’s rhinos. Each sculpture will highlight the magnificence of the species and the people and solutions who work hard for their survival.

All lions, including the magnificent ‘Civilian Warrior’ by David Griggs, are already available to bid on globally via the world’s largest online art marketplace Artsy. The online sale concludes at 9pm (GMT) on 10th November. Further information can be found at https://www.tuskliontrail.com/auction. David Grigg’s ‘Civilian Warrior’ will be on display at Sydney Town Hall until 16th November 2021.

Ronnie Wood, Guitarist in the Rolling Stones and Tusk ambassador said: “It’s a joke. I thought that lions were running rife, but their numbers are really diminishing and that cannot happen. We must not let that happen.”

DHL is the global lead partner for the Tusk Lion Trail. Roy Hughes Executive Vice President of Network Operations for Europe at DHL said: “We are proud sponsors of the Tusk Lion Trail 2021, managing the safe transportation and logistics of these fantastic creations has been an honour. To now see them lining the streets of iconic locations across the globe for the masses to see ahead of the auction fills us with pride.”

All funds raised via the charity auction will go towards the work of Tusk and its partners in protecting species and supporting communities across Africa. 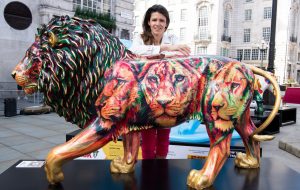 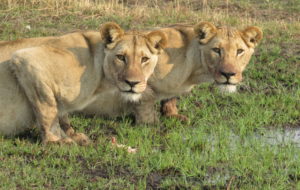