Hannah has set herself an ambitious fundraising target of £100,000 to support Tusk’s incredible conservation work and help to push the charity past the £100 million raised since it was established 32 years ago.

Timed to fall just after the Queen’s Jubilee celebrations, The Sovereign Collection will preview at the Mall Galleries on 7th June with an exclusive private evening event. Two paintings will be auctioned with 100% of the proceeds donated to Tusk. Furthermore, 20% of all other sales from the exhibition will be donated to the charity.

With prices ranging from £12,000 – £35,000, The Sovereign Collection will consist of 15 new wildlife paintings including elephant, cheetah, tigers and the great apes. Shergold’s highly recognisable style brings colour, geometric pattern and scale together in an incongruous mismatch with her naturalistic subject matter. Big cats sprint across the canvas in fluorescent technicolour on gold leaf, and grey elephants are breathed to life in iridescent blues, greens and reds. Shergold’s technique uses palette knives to scrape thick impasto paint through itself and energetic marks and dripped paint create movement rarely seen in wildlife art.

Speaking about her new role, Hannah commented: “I have followed Tusk’s work for many years now and have marvelled at the huge impact that this relatively small team has had across the African continent. I strive to keep the philanthropic business model as fresh and exciting as the artwork, giving my collectors and investors a reminder of Tusk’s impact and their own generosity every time they look at their paintings.”

Shergold’s background differs from the traditional artistic route; a Cambridge University graduate and Army helicopter pilot, she has applied her unique skill set to becoming a highly successful self-representing artist, running all aspects of her business, exhibitions and events. Since leaving the military just 4 years ago Shergold has sold over £500,000 of her own art and raised over £200,000 for charity, including over £90,000 for Tusk and £50,000 for the UK Invictus Games team in Sydney, Australia, in 2018.

Last year Hannah was invited to participate in the Tusk Lion Trail, a global initiative that brought together personalities from across the worlds of popular culture, sport and art, including Tusk ambassador and Rolling Stones guitarist Ronnie Wood and comic icons John Cleese and Noel Fielding. Hannah’s impressive contribution, ‘Brian the Lion’, sold at auction for £22,000.

Tusk CEO Charlie Mayhew stated: “Hannah’s outstanding commitment to Tusk during the pandemic has meant she was an obvious choice as ambassador to the charity. We continue to be impressed by her creative approach to fundraising and her ability to find new ways to excite our supporters. We look forward to working with Hannah as she continues to innovate in the spaces where art and philanthropy intersect.”

Tusk has supported forward-thinking conservation intervention in Africa for over 30 years. Poaching, habitat loss and human-wildlife conflict all have a devastating effect on Africa’s wildlife, amplified by the Covid-19 pandemic. Since its inception 32 years ago Tusk has raised over £99 million for communities, businesses and conservation projects across the continent, supported by their Royal Patron, HRH The Duke of Cambridge. 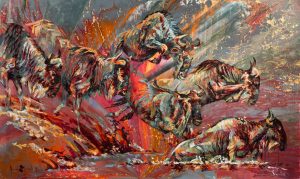