Realising the power of the arts as a behaviour change tool, Amos decided to use his award funding to bring the underutilised weapons of poetry and drama to the battle against poaching.

Unlike previous winners of the Tusk Wildlife Ranger Award, Amos’ work on the front line is different, focusing largely on intelligence as a way of fighting wildlife crime. By understanding how poachers work and dismantling their networks at root in the communities, his efforts have yielded significant success, with Hwange National Park seeing a significant reduction in poaching: from over 300 elephants killed in 2013, to 25 in 2019.

Amos’ work is led by the belief that conservation must be holistic – focusing not only on prevention but also on rehabilitation and education. This approach has been key to how he has used his award funding. In an interview with The Zambezi Times he said “To me, the community is the first line of defence for effective wildlife conservation. The poacher comes from the community, the poacher disposes of wildlife products in the community, hence it is the community which is very important, but is rarely recognised.”

He went on to share that people were being misled towards committing wildlife crime due to lack of knowledge of the laws protecting wildlife. “The project began in December 2020 soon after I won the award. I engaged Shangano Arts who were already in drama and poetry. Surprisingly, they were not doing wildlife poetry nor drama. I sat down with them and came up with a plan to fund wildlife drama titled ‘Wildlife Conservation For You and Me.’

The campaign is already bearing fruit- as shown in the below video of two community members freeing an ensnared kudu. Amos attributes this to greater community awareness brought about through his campaign.

Amos’ work with Shangano Arts was made possible thanks to his Tusk Wildlife Ranger Award (which was sponsored by the Nick Maughan Foundation) along with Bhejane Trust. 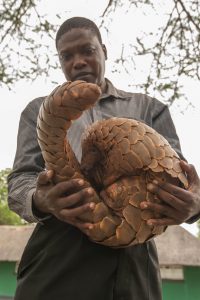 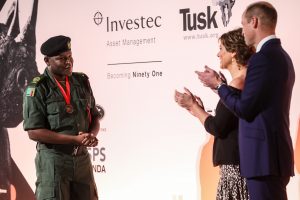