“By engaging local buy-in of sustainable use of forest resources and improving peoples’ livelihoods we can make a real difference, says Josia. “Local management committees have received training on conflict resolutions and governance and through practical environmental education, communities have begun to adopt eco-friendly attitudes and behaviour.

“At the Sifaka Conservation Programme, we aim to protect the crowned sifaka and its remaining habitat while improving the livelihoods of local communities and empowering them to protect the future of the lemur.

“This critically endangered species has a very restricted range in the wild, with the only previously known significant populations surviving in fragmented dry deciduous forest patches in Majunga, northwest Madagascar.

“Following the discovery of new populations along the central highlands of Madagascar, we are now engaged in protecting these newly discovered sites of fragmented sites where larger populations of the crowned Sifaka occur. These dry forests represent a remarkable tropical forest ecosystem with disparities in richness, endemism, and diversity. However, they were previously neglected and under pressure and therefore not in a position to support a critically endangered species.

“We monitor the habitat quality and record threats and species present in the forests. One of the greatest challenges we face is thecrease of human populations at each site, which also increases the need for agricultural lands and energy and demand for timber. The inefficiency of income-generating activities and weak local conservation management structures inevitably leads to the destruction of ecosystems. This does not bode well at all for the crowned sifaka, a species especially sensitive to habitat loss and food scarcity and particularly vulnerable to human interference.

“Having locally recognised protection status for the dry forest habitat is important as it helps to sustainably overcome the destruction of ecosystem services in the target sites for future generations. One of the biggest successes we’ve had thus far is the increase of the crowned sifaka population by 40% during the last four to five years, with a reduction of threats to almost zero in the conservation zones of the target sites.

“The conservation programme benefits not only the target species itself but the entire ecosystem, including other critically endangered lemur species. By protecting the important mixture of ecosystems such as dry forests, riparian forests, and wetlands, we are also able to maintain the ecosystem services for local people such as safe water, agricultural lands, and ethical values for forests.” 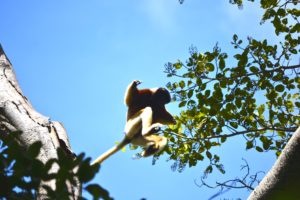 IMPACT aims to protect and conserve Madagascar’s unique biodiversity while improving the lives of its people.

The island has already lost 90% of its forest cover, with 75% its 20 million inhabitants still living in rural areas and 70% surviving on less than one dollar a day. IMPACT’s approach combines ecological research, community development and environmental education to address the key drivers of biodiversity loss.

Research focuses on several species of lemur, in particular their use of fragmented forest areas, and is combined with community engagement around the study sites. Development initiatives include training on improved farming methods, to reduce the pressure of agricultural expansion, and promotion of alternative income sources. Tree-planting projects include both native species for forest restoration and fast-growing non-invasive species for local people to use as fuel. There is also a recycling initiative and an ‘Ecobrick’ project using waste plastic as a construction material.

Josia Razafindramanana, was a finalist for the Tusk Conservation Awards in 2013, receiving a donation that enabled them to continue work with communities across Madagascar. The funding helped with operational costs such as equipment, fuel and employment.

The conservation of Madagascar’s unique natural heritage is an urgent and complex challenge. Continuing IMPACT’s innovative and multi-faceted work is a vital component in meeting it. 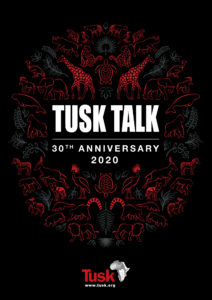 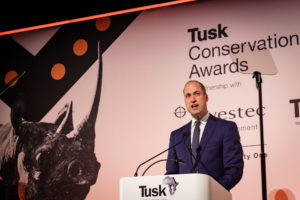 Find out more about how we celebrate conservation leaders here.