Oliver Nsengimana is currently on a one-man mission to save the grey crowned crane in Rwanda.

“A symbol of wealth and longevity, the grey crowned crane and their chicks, have long been poached for the pet trade,” Olivier tells us. “This, combined with the destruction of their natural habitat, has led to an 80% reduction in the population over the last five decades. At RWCA we infuse all our activities with education and opportunities to raise awareness. This is the key to increasing understanding, sharing knowledge and creating a sense of national pride and ownership of a species.

“It is with education that long-term attitudes and behaviours can change and sustainable impact can be made. In our efforts to combat the illegal trade of grey crowned cranes we have launched national media campaigns on television and radio and trained 840 local leaders about the laws protecting cranes. We have also conducted community campaigns in busy market places, with loud speakers and entertainment to attract a crowd, before discussing our conservation messages and holding lively debates. In 2019 we held 10 such events reaching over 10,000 people.

“We also invest a lot in working with children and young people, inspiring them to love and protect nature as they will be our future generation of conservationists. We have reached over 20,000 children in schools near to crane habitats, distributing copies of our conservation comic book and have set up nine youth clubs to educate children about the environment using the Tusk PACE materials. Our biggest challenge in environmental education is the huge number of people that we would like to reach. One way we have overcome this is to have a team of Conservation Champions recruited from communities near biodiversity hotspots across the country, representing us and our work. This has been an effective way to spread our conservation messages and have a continual presence within the communities. In 2019, our team of 30 Champions held over 100 events and meetings to raise awareness about cranes and the need to protect their habitat, reaching over 11,000 people.” 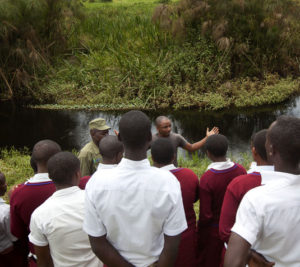 Oliver Nsengimana is currently on a one-man mission to save the grey crowned crane in Rwanda. He trained as a vet and originally worked with gorillas. It was at this time that he recalls: “As soon as I was out in the field, working with these amazing animals, I thought, wow, this is me, conservation is what I was meant to do with my life.”

Olivier grew up in post-genocide Rwanda and he feels that all Rwandans have a role to play in rebuilding their country. He realised the plight of the grey crowned crane (with only between 3 – 500 remaining in Rwanda) and he “decided it was my time to do something about it” and make his own unique contribution to his country.

Such is his drive and dedication that the project is achieving remarkable success in rehabilitating captive cranes, developing environmental clubs for children, launching media campaigns and fighting illegal trade in collaboration with the government. His family life is dominated by his work and his daughter recognised the call of the crane before that of any farm animal!

And the driving force behind his current work? “A strong belief that the involvement of the local population in conservation issues is the key to their success and sustainability.” Olivier recognises that the threats to biodiversity are complex and the solutions require an holistic approach to achieve results.

As he says, “Having the cranes disappear means there is something wrong, a balance that has not been maintained. If we protect animals in their habitats, we are protecting ourselves. If we fail, we are endangering our children.” 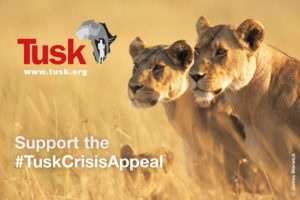 Watch: A Life With Cranes