Tusk’s funding enabled Lewa Wildlife Conservancy to sustain critical wildlife protection, habitat conservation, and livelihood development operations. The proceeds secured the return of rangers who were on unpaid leave and retained the entire security team of 158 rangers in gainful employment, enabling them to protect wildlife and support their families during the hard economic times.

The Conservancy’s zero rhino poaching rate has been achieved through the continuous monitoring of wildlife on Lewa and effective responses to reported incidents of human-wildlife conflict. Edward is a long-standing partner of Tusk and was a recipient of the Tusk Wildlife Ranger Award Winner in 2015.

“My role as the Head of the Anti-Poaching Unit for Lewa Wildlife Conservancy is crucial to the survival of these species in Kenya. I am responsible for the planning, designing, and implementation of this massive landscape’s security strategy. It has therefore been important to embrace technology to aid in the fight to reduce rhino and elephant poaching. Innovative technology solutions have made it easier for us to map conservation areas and track wildlife, rangers, and the movement of people. Through technology we can analyse trends and mark hotspots, thus leading to informed deployments. Collaring of wildlife has made it easier to track wildlife and respond to humanwildlife conflict on a timely basis, thus improving human-wildlife coexistence.

“Our security operation covers more than two million acres and is home to thirty three community managed wildlife conservancies, tens of thousands of migratory elephants and the hundreds of rhinos living within the Lewa Wildlife Conservancy”.

Additionally, the introduction of modern equipment has enhanced our patrol and security measures which run round the clock. However, the evolving and ever-existing threat of rhino poaching remains one of our biggest challenges, along with an emerging interest in other wildlife for trophy or bushmeat hunting and the lack of a secure habitat for wildlife due to the increasing human population. Our work depends on the financial support required to empower the anti-poaching team with the equipment, welfare, motivation, and intelligence gathering needed to fully be able to maintain zero cases of poaching.

Maintaining a poaching rate of zero for six years across the 93,000 acre Lewa/Borana landscape has been my greatest achievement. I’ve accomplished this by ensuring effective training of the anti-poaching team, empowering the anti-poaching team with modern equipment through lobbying and inspiring co-operation between Lewa and government agencies aimed at improving conservation efforts and giving a sense of direction to other conservancies on how to run security operations efficiently. I’m proud to make a difference through security initiatives aimed at stamping out poaching and maintaining zero cases in a bid to conserve our endangered species for the sake of future generations. 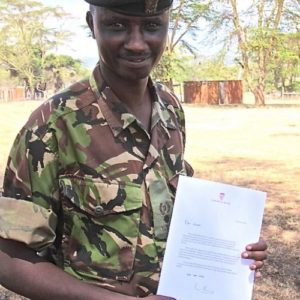