Winchester based artist Hannah Shergold has a fascinating, albeit unusual back story and is now one of the most successful self-representing artists in the UK.  Since leaving the Armed Forces in April 2018, Hannah has hosted two solo exhibitions on London’s Pall Mall and raised over £120,000 for charity through her artwork. We are absolutely thrilled that she is now partnering with Tusk for our 30th anniversary. 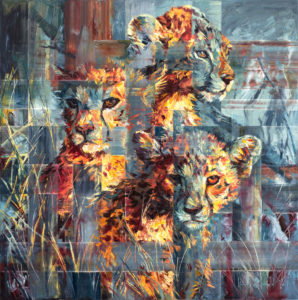 Despite the current Covid-19 crisis Hannah has generously committed to releasing her 2020 collection with 20% of all proceeds being donated to Tusk. Furthermore, she is donating two stunning paintings  (“Elephants Entwined” with Hannah above, and “Cheetah Cubs in Hiding” right) to be sold via online auction on 21st June with 100% for the charity. Click here for more information on the online auction and to make a bid. Please bid generously in the knowledge that you will be supporting the frontline of conservation in Africa!

But despite her success, Hannah has taken a less conventional route to reach it.  She graduated from Cambridge in 2006 having studied pre-clinical Veterinary Medicine. After three years as a bronze sculptor she joined the Royal Military Academy Sandhurst and commissioned into the Army Air Corps.  Following a ground tour of Afghanistan with the infantry she qualified as a Lynx helicopter pilot and has served all over the world including Germany, Canada and Kenya.

Listed as one of the top 10 “Women to Watch in the Arts” by About Time magazine, Hannah has featured on Sky Arts Portrait Artist of the Year and in the Financial Times “How To Spend It” section, amongst others.

“My artistic process is a head first dive into the unknown”, she says, “Precision is easy, but it has no soul. I have to break every perfectionist bone in my body to deliberately ruin something I have taken hours to achieve! Create it, break it, fix it, balance it. It’s an exhausting journey!”