Extinction is a topic that’s plagued Caleb Ofori-Boateng since childhood.

Losing his father when he was only seven years old left a deep impression which would shape his future vision of the world.

“He was very dear to me and very close to me,” recalls 39-year-old Caleb, describing the man who worked as a ranger and assistant warden in Ghana’s Mole National Park. “I always thought he would show up again someday. But he never did. Instinctively, it made me very concerned about things that cannot be reversed.”

When his conservation studies led him to discover West Africa’s amphibian species were hurtling towards a mass extinction crisis, due to habitat loss and increased use of agrochemicals, Caleb knew action was needed.

“Just the thought that they could be wiped out from the face of the planet, never to be seen again, really troubled me. And my first reaction was why are we not hearing about this?”

The reason was down to misguided beliefs and taboos. Frogs are feared and vilified in Ghanaian culture: they supply snakes with venom, cause infertility, and can even instigate a sex change if they hop on your arm.

Although Caleb had been weaned on these ideas, he quickly realised they were nonsense.

“The reason to do something impactful, to do something pioneering was stronger than these beliefs. Moreover, I had not seen anybody become a girl by touching the frog!” he laughs.

Setting up his NGO Herp-Ghana, however, was far from straightforward. It was hard enough to secure funding for a West African project, let alone for a species lacking the charisma of Africa’s Big Five. At the beginning, he worked mainly with his wife, but soon needed to pay salaries.

Juggling several full-time jobs (which he still does up until today), he funded the project himself. During low points, he recalls going out with only packets of garri (a type of cassava flour) mixed with sugar.

“I’d chew on it to fill my stomach,” he says, admitting he almost died as a result and still suffers from ongoing stomach ulcers.

Regardless of the hardships endured, he insists his passion for conservation has always carried him through.

Qualified as Ghana’s first herpetologist, his work is truly pioneering. Already, he has helped establish the first protected area for endangered amphibians, a 60km2 reserve in eastern Ghana’s Togo-Volta Hills. Even more impressively, part of the land was donated by the community – the result of an innovative ‘conservation evangelism’ initiative.

“We realised that when people go to a church or mosque they want to change,” explains Caleb, who gives regular talks at religious centres.

Additionally, he’s helped to fund a canopy walkway in the scenic region as part of an ambitious eco-tourism project.

Fuelled by endless ideas and enthusiasm, his conviction never wanes no matter how tired and exhausted he might be.

“I know it sounds crazy, but have this strong belief,” he confesses. “If I’m convinced about something and I believe that it can be done, it will be done. Somehow it will happen.” 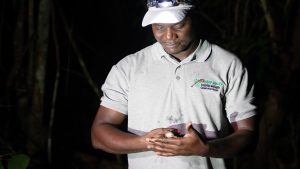