This year also saw the introduction of a new category – the 10km Executive Race, which saw CEOs and Directors from major Kenyan companies take to the course to support the marathon personally. The winner in this category was none other than the CEO of our headline sponsor Safaricom, Peter Ndegwa, with a time of 57 minutes and 19 seconds. The winner of the women’s executive race was Tabitha Kamau with a time of 1:18, also from Safaricom.

Amongst our overseas runners were teams from BlackRock, Emso Asset Management and Ninety One, who won the 2022 fundraising trophy. Fundraising is set to close at the end of July, but all teams and individuals have already raised a phenomenal amount for conservation in Kenya.

International runners were joined by members of the Tusk team at a series of project visits to enable them to see the impact of their fundraising first hand. These included visits to the Lewa Conservation Education Centre, NRT Beadworks, Ngare Ndare Primary School and Kanyunga Secondary School. These visits demonstrate the vital importance of the marathon to both local communities and local wildlife.

We are extremely grateful to everyone who took park, and to the teams from the Lewa Wildlife Conservancy, Safaricom, EABL, Tetra Pak and Access Bank, as well as the many other sponsors, whose support allowed the marathon to return with a real bang.

The results of the 2022 Lewa Safari Marathon can be viewed here. 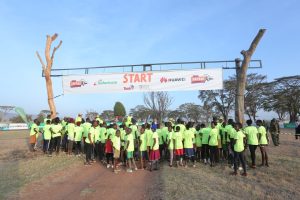 Find out more about the marathon