Laikipia is home to the third largest lion population in Kenya, but the survival of these lions depends on people’s ability to live alongside them, as there are no functional protected areas in the ecosystem. Coexistence between lions and people is only possible if the numbers of livestock killed by these lions is kept low, as habitual livestock killing is the main cause of death for lions, when livestock owners retaliate to protect their livelihoods. Laikipia’s livestock owners show amazing willingness to coexist with lions but they cannot sustain repeated losses of valuable livestock.

Exposure to weak and dying livestock during the 2017 drought gave lions a taste for livestock! Lion Landscapes’ conflict manager, Thomas Mojong’s, responsibility is to help local livestock owners to better protect their livestock from lions but by the start of 2018 he was overwhelmed by requests for help. He reached out for help and Safaricom Marathon funding allowed Lion Landscapes to launch the new Lion Ranger program to support Thomas in his work. 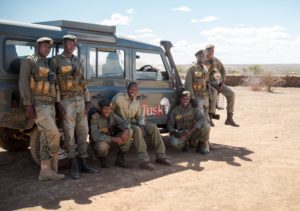 Lion Rangers are specially trained units of National Police Reserves, who help people to better protect their livestock from lions by advising on building stronger livestock enclosures, better herding practices and avoiding areas where lions are most likely to be. Lion Rangers also keep track of the lions themselves and warn livestock owners to stay away when a lion is known to be near. If a lion does attack livestock, then the Lion Rangers respond quickly to identify what went wrong and how best to prevent another attack.

They also talk to the people involved to dissuade retaliatory killing of lions and educate them about the human and livestock health implications of using poisons. Lion Ranger activities are supported by movement data from collared lions, which is made accessible to Rangers and conservation livestock owners via a mobile App. The use of better technology to track lion movements helps livestock owners to avoid them, and Lion Rangers to better protect them. 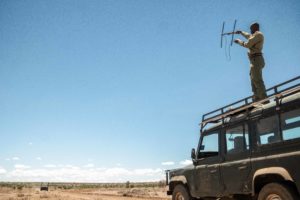 This combination of technology and boots on the ground help make it possible for people to share the landscape with lions. Thomas is no longer alone, he is now the leader of 2 units of Lion Rangers and has two of the worst offending lion prides collared and tracked via a mobile App. Both the number of Lion Ranger Units and the number of lion prides collared are set to more than treble during 2019, with help from further Safaricom Marathon funding.

“When lions eat our livestock we become enemies, but lions are like me; they need to feed their children. As Lion Rangers our mission is to stop lions from killing livestock and protect wild prey for them to eat instead. That way people and lions do not have to be enemies and can share the same land.” Thomas Mojong. Lion Ranger coordinator, Lion Landscapes.