Innovation is a cornerstone of conservation progress and Tusk champions our field-based partners to diversify and expand their methods for tackling current and future conservation issues.

Big Life Foundation has operated in the Amboseli-Tsavo ecosystem for nearly 30 years. Thanks to their dedicated rangers and staff, in 2020, BigLife were able to maintain a zero rhino and elephant poaching rate across their 1.6-million-acre operating area.

Amboseli and Tsavo National Parks are renowned for their wildlife populations, most notably elephant, but these animals spend the majority of their time on community land – ‘group ranches’ – which enable the freedom of movement for wildlife, humans, and livestock.

The ability of animals to travel with the seasons in search of food and water, on ancient migratory paths, is essential for their survival.

The coming months and years are going to be critical, for pressure is building for subdivision of the land. A transition from continuous community-owned landscape to private ownership of land by individuals threatens to break the ecosystem into thousands of small acre plots, which will then be sold and converted to other uses; wildlife will run out of space, and the Greater Amboseli ecosystem’s wildlife populations will be decimated.

A major focus of Big Life in the coming year will be securing large tracts of community land through land leases which will maintain Maasai ownership of land, but restrict fragmentation to ensure continuity. The key though will be securing wildlife corridors through areas of development to ensure long-term connectivity of wildlife populations across the ecosystem.

Second image shows elephants feeding in swamps immediately next to farmland (the dark patches, and the smoke in the distance is the boundary between the farms and community), which is unfenced and therefore a great source for human-elephant conflict. 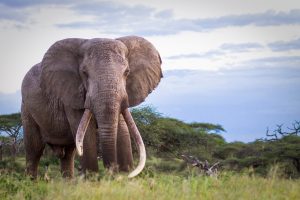 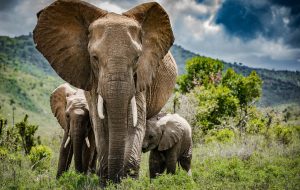