Launched with Prince William in 2013, the Tusk Conservation Awards, in partnership with investment manager Ninety One, celebrate the work of leading African conservationists. Rangers often work for little reward, risking and regularly losing their lives to protect Africa’s wildlife and fragile ecosystems. The Tusk Wildlife Ranger Award, sponsored by the Nick Maughan Foundation, recognises the dedication and commitment of an exceptional individual on the front line of these efforts.

Tusk is proud to announce this year’s winner of The Wildlife Ranger Award; Suleiman Saidu.

Saidu commented: “Every day I feel motivated to do my job because I know poachers are out there trying to create problems. I need to counter any damage they might cause. I love wildlife and it’s my responsibility to take care of these animals for generations who come after me.”

Employed by the Nigeria National Park Service in 1999 as a park ranger, Suleiman has progressed through the ranks to become a Senior Game Guard Ranger at the Yankari National Park. Suleiman’s duties include leading anti-poaching patrols, working with local communities and elephant guardians to help mitigate human-elephant conflict, monitoring elephants, prosecuting poachers in court, ranger training and research. His diligence, hard work, commitment and honesty have earned him the respect and admiration of both his colleagues and his community.

Without Suleiman and his leadership skills, Yankari would not be the park it is today. Yankari Game Reserve in Bauchi State is Nigeria’s richest wildlife site and home to one of the largest remaining elephant populations in West Africa. Taking a zero-tolerance approach, Suleiman has driven down cattle grazing in the reserve, clamped down on corruption and drastically reduced the levels of poaching.

Charlie Mayhew MBE, Chief Executive of Tusk, commented: “Suleiman is a truly exceptional ranger and we are thrilled to be able to recognise his incredible work with this award. With Covid-19 continuing to damage the livelihoods of those on the front line of African conservation, it’s vital we support heroes like Suleiman who are holding back the tide of
extinction. We thank Suleiman for his endless dedication to the conservation of Africa’s wildlife.”

TV adventurer and Tusk ambassador, Bear Grylls added: “Through my ambassadorial role and involvement with the Tusk Wildlife Ranger Challenge, I have seen first hand how Africa’s rangers continue to put their lives on the line in defence of wildlife, despite resources stretched to extreme capacity. With poaching on the rise, both for trophies and bushmeat, the determination of rangers in the face of extreme danger deserves our recognition, admiration
and gratitude.”

Nick Maughan, founder of the Nick Maughan Foundation, stated further: “Suleiman’s work to monitor elephant populations, combat poaching and help mitigate human-elephant conflict is essential not only to the protection of a gravely endangered species, but to maintain the rich biodiversity of the environment which elephants share with other species. Elephants make pathways in densely forested areas that allow passage for other animals, and an elephant
footprint filled with water even creates an ecosystem for tadpoles and other small organisms. So protecting elephants helps protect other animals and nature more broadly. For this we owe thanks to brave rangers such as Suleiman and all the work they do.”

Previous winners of the Tusk Wildlife Ranger Award have included Edward Ndiritu from Kenya (2015), Manuel Sacaia from Angola (2016), Solomon Chidunuka from Zambia and Lucky Ndlovu from South Africa (2017), Julius Obwona from from Uganda (2018), Benson Kanyembo from Zimbabwe (2019), and the 2020 winner was Amos Gwema from Zimbabwe (2020). 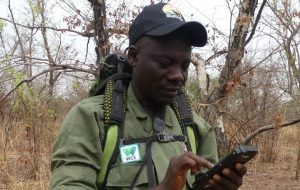