The two have come together on behalf of Tusk before, both speaking at the 2016 Tusk Conservation Awards in London.

“Two years ago at this event, Sir David Attenborough warned that man is losing his own connection with nature. Said HRH, The Duke of Cambridge.

“The IPCC’s recent report was the loudest warning bell yet from the scientific community that we must act now. The clock is ticking towards a tipping point when the impact of what we are doing will become dangerously irreversible.

Our own survival is reliant on our ability to reverse the terrifying decline in the world’s biodiversity. Modern human society as we know it depends on natural resources to survive and thrive. As the report says – ‘nature is not just a nice to have’.

Whether we are living in an urban or rural environment, nature matters to us all. We have a responsibility and an obligation to the next generation to drastically reduce the extent to which we plunder the planet’s natural resources.

I am convinced that we have it in our power to reverse this trend.”

At Davos, Prince William asked why Sir David had chosen to speak out on environmental issues such as climate change?

“When I started, 60 years ago, Sir David began, there was not the feeling that we would annihilate a part of the natural world. The notion that human beings would exterminate a whole species was not something people were thinking about, and when it happened it seemed like the exception.

Now, of course, we are only too well aware that the whole of the natural world is at our disposal”, he adds.

“Now, there are more people living in towns than in the wild, so it means that the majority of the human race are out of touch with the natural world.”

Prince William then asked how urgent is the crisis we face?

“It is difficult to overstate it, Sir David continued. We are now so numerous, so powerful, so all-pervasive, the mechanisms that we have for destruction are so wholesale and so frightening, that we can actually exterminate whole ecosystems without even noticing it.”

When asked why world leaders have taken so long to react, Sir David posited.

“Because the connection between the natural world and the urban world, human society, since the Industrial Revolution, has been remote and widening”, Sir David says.

“We didn’t realise the effects of what we were doing ‘out there’. But now we are seeing that almost everything we do has it’s echoes, duplications and implications across the natural world.

The natural world, of which we are a part, is incredibly complex and it has connections all over the place. If you damage one, you can never tell where the damage is going to end up, because of all the broken connections. And if you break all of them, then suddenly the whole fabric collapses and you get eco-disaster.”

Sir David ’s advice for the younger generations was:

“There has never been a time when more people have been out of touch with the natural world, than there is now”, he says.

“We have to recognise that every breath of air we take, every mouthful of food we take, comes from the natural world. And if we damage the natural world, we damage ourselves. We are one coherent ecosystem. It’s not just a question of beauty, or interest, or wonder – its the essential part of human life is a healthy planet. We are in danger of wrecking that.

We are destroying the natural world, and with it ourselves.”

You can find out more about the World Economic Forum – from where this content was gathered – and watch the interview in full here.

Tusk’s work continues to secure a future in which people and wildlife can both thrive across Africa. Please join us in the fight. 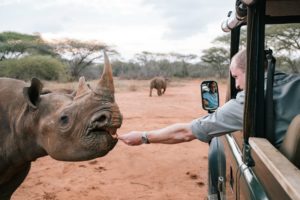 HRH the Duke of Cambridge joined Tusk on a tour to Namibia and Tanzania to visit the Tusk projects playing an integral part in the fight to #endwildlifecrime. Discover more. 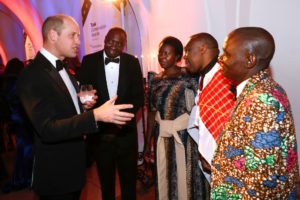 The Tusk Conservation Awards give us a chance to celebrate extraordinary people, whose work and lives might otherwise go unnoticed outside their fields. Find out more.